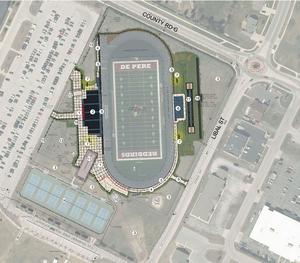 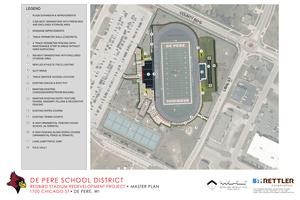 Projects will provide a safer, more efficient and more comfortable experience for fans and facility users
Upgrades to and expansion of Redbird Stadium at De Pere High School were reviewed by the Board of Education during their meeting Monday, Dec. 9, following a presentation of preliminary plans by the District’s consultant.
Supt. Ben Villarruel said replacement of the bleachers, which date back to construction of the original stadium in the early 1980s, upgraded energy-efficient lighting and resolution of stormwater drainage issues are primary drivers of the plan.
“Considering those needs gave us the opportunity to look at the overall configuration of the grandstand, track and field amenities, and storage requirements,” he said.
The $2.75 million plan reviewed by the Board incorporates:
The current grandstand seats approximately 1200 people, a capacity that was a good fit when the High School had just over 800 students. Current enrollment is nearly 1400.
Villarruel said the District prefers not to borrow to fund the project, and will instead look to existing savings combined with fund-raising.
“We have to balance this investment with other District priorities,” he noted.
The tentative schedule is to apply for construction permits and let the project for bidding in January and February 2020. The Board will be updated on the project in early March, and construction could begin in mid-May. Spring stadium users will have access to some areas during construction. Completion is scheduled for mid-August.